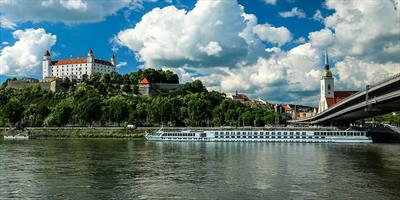 The main train station of Bratislava is locally named Hlavná stanica (in train timetables often Bratislava hl. st.), which means main station in Slovak. Basically all international and long-distance trains arrive and depart at this station, including those to Prague, Budapest or Vienna.

The station is located outside the historical centre in the northern part of the city. The square in front of the station is Námestie Franza Liszta and it is at the junction of two big streets: Štefánikova and Šancová. The Old Town is about 15 minutes’ walk to the south. You can see the station’s location on the map below.

How to Get from the Station to Old Town

In about 10 minutes walking, Štefánikova street (one of the two big streets) takes you to Hodžovo námestie, which is in front of the Presidential Palace in the north-western corner of Old Town. From there (the street’s name becomes Staromestská – Old Town street) it is further 10 minutes to Bratislava Castle and the New Bridge (Nový most or Most SNP), the iconic bridge with the “UFO” at the top.

If you don’t want to walk, there are frequent buses in this direction. The bus stands are directly at Námestie Franza Liszta in front of the train station.

There are also trams – tram number 1 takes you directly from the main train station to most places in the Old Town, including Obchodná street, Námestie SNP and the riverside. Tram services to the train station had been suspended in the recent years due to poor track condition, but have reopened after a renovation in 2014 are now fully operational. The tram is probably the easiest for foreign tourists to navigate. It doesn’t go through Štefánikova street though, but slightly more to the east.

If you want to get to the south bank of the river, you need to take a bus – trams don’t go there.

The main international and long-distance train services (and usual travel times) from Bratislava main station include the following:

There are night trains available on many of these routes – good to save both time and money.

The website is in Slovak language, but you can switch to English in the upper right corner.

You may also want to check this page for discounts and special offers on international trains from Bratislava:

You can of course also buy tickets and get information directly at the railway station, although there might be rather long lines at the busy times. Furthermore, while staff generally speak some English, it is often very poor level and communication may be difficult (depends on who you get to). However, the locals are usually very helpful and particularly the younger ones have good command of English, so another passenger may help if needed.

Luggage Storage at the Station

The luggage storage is open daily from 4am to midnight (23:55 actually so don’t be late). Besides standard luggage it also accepts bicycles and baby strollers. Most luggage storage facilities at Slovak railway stations have limits regarding the weight of the items they can accept and it’s often as low as 15kg, although at Bratislava main train station they also accept heavier items (basically things you would normally take with you on a train).

Make sure you take and keep the receipt when leaving the luggage there to avoid complications at reclaim.

Most visitors prefer to stay in the Old Town, which is a nicer area and much closer to most tourist attractions. That said, there are some accommodation options near the train station, particularly hostels and budget hotels, which are located in the smaller streets on both sides of Šancová (the big street).

Also see our guide to the best places to stay in Bratislava.