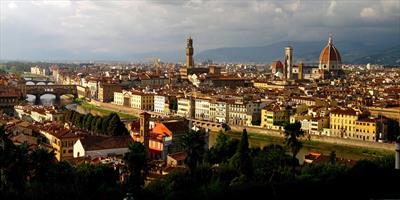 Florence (or Firenze in Italian) is art and mainly Renaissance, which started here and subsequently spread to other cities in Italy and Europe. Florence is where many of the Renaissance titans actually lived for large part of their lives and where they created their masterpieces. The list is long, but among the most known: Michelangelo, Leonardo da Vinci, Giotto, Donatello, or Botticelli. Needless to say, much of their work can be seen here. Even if you didn’t know anything about art by the time you arrived in Florence, you would probably be leaving as an art fan few days later.

The top place to see with respect to Florence museums and galleries (at least what you’ll find in most tourist guides), is the Uffizi Gallery (Galleria degli Uffizi) in the Uffizi Palace. Besides Florentine Renaissance, there are works from well-known artists from other parts of Italy and Europe, mostly from the period spanning from 13th to 18th century, but even some ancient Roman sculptures. One full day is probably the minimum to dedicate to Uffizi, and due to its enormous popularity, be prepared for long lines (it is advisable to book tickets in advance). High concentration of Renaissance art, including Titian or Raphael, can be also found in the Pitti Palace in the former private collections of Florence ruling family, the Medicis.

Another place to see is definitely Accademia di Belle Arti (Academy of Fine Arts), which hosts the famous Michelangelo’s David. It was originally situated outside at Florence main square, Piazza della Signoria, but was replaced by a copy and moved to the Accademia. The copy at Piazza della Signoria is still very popular, it is the typical place where tourists take pictures with this symbol of Florence.

Weeks could be spent inside the numerous galleries and museums, but it would be a pity to miss some of the monuments outside, like Palazzo Vecchio (the Old Palace) or the medieval bridge over the Arno river, Ponte Vecchio (the Old Bridge), the only one that survived World War II (all the other bridges were blown up by the retreating Germans, who previously occupied Florence for about a year). The bridge is unique thanks to the shops built upon its edges, like it was usual long time ago.

Basilica di Santa Maria del Fiore, or Duomo, is the landmark of the city. Its construction took well over hundred years, but one person who influenced its looks the most was the famous architect Filippo Brunelleschi, who engineered the dome, the largest masonry dome in the world. Besides the basilica building itself, Baptistry and Giotto’s Campanile (the tower) are also parts of the cathedral. You may visit the Duomo Museum that hosts large parts of the cathedral’s decoration after it was removed from it after big floods in 1966.

If you still don’t have enough of Michelangelo (whose presence can really be felt everywhere in the city), visit another church, Basilica di San Lorenzo, where he worked for many years on interior and sculptures, or Casa Buonarroti (Michelangelo’s house), museum dedicated to him. You may also visit Basilica di Santa Croce, where he was buried. There is also tomb of Galileo in Santa Croce, who was reburied here longer time after his death (Church representatives initially disapproved that).