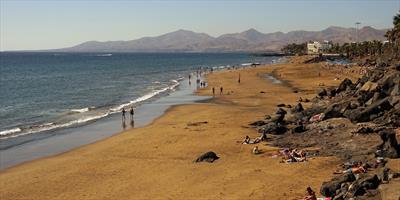 From Lanzarote the closest of the other big islands is Fuerteventura 11 km to the south. On the other hand, Lanzarote is more than 400 km far from El Hierro, the most distant of the seven main islands.

Lanzarote has a surface area of 845.6 km², which makes it the fourth largest of the seven main Canary Islands (the bigger islands are Tenerife, Fuerteventura and Gran Canaria). The maximum length of the island is almost 60 km and the width around 20 km.

The landscape on Lanzarote looks quite strange and you can often encounter claims that Lanzarote seems like being on the Moon. This is a result of the island’s volcanic origin combined with arid climate, which is under strong influence of the nearby Africa. Lanzarote is still volcanically active; there were strong eruptions recorded in the 18th century.

The mountains on Lanzarote are not high. Highest peak Penas del Chache reaches only 670 m above sea level. Though it stays short of height and size records, Lanzarote has some natural treasures. For example there are several volcanic caves including Cueva de los Verdes (Green Cave), which is accessible and popular with tourists. Or you can see the “Moon-like” landscape in the volcanic Timanfaya National Park. The entire Lanzarote has been declared a biosphere reserve by UNESCO.

Total population of Lanzarote is over 127,000. It ranks third only after Tenerife and Gran Canaria. These three islands all have busy international airports and regular flights from many European cities.

From the administrative point of view, Lanzarote is a part of the Las Palmas province (the capital of this province is Las Palmas on Gran Canaria).

There are seven municipalities on Lanzarote. The capital, main port, and the location of the airport is Arrecife, situated on the south-east coast facing Africa. The population of Arrecife is about 50,000. The other six municipalities are: Haria, San Bartolome, Teguise, Tias, Tinajo, and Yaiza.