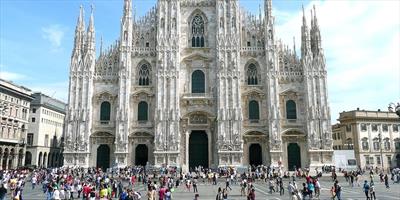 Being the second largest city (1.3 million people) and the true economic capital of Italy, Milan (or Milano in Italian) is a little different from other tourist destinations in Italy. You won’t feel as if time has stopped here. Hosting Italy’s stock exchange and being a seat of major Italian banks and businesses, Milan is a busy and modern centre, sometimes a bit too noisy and polluted for those seeking narrow old streets and ancient monuments. But for those who like culture, fashion and shopping, Milan is definitely a candidate for my-favourite-Italian-city title. Though its modern nature, you will find some unique monuments and places worth seeing here. Most of them are located within walking distance from the heart of Milan, Piazza del Duomo (Duomo Square).

Duomo, Milan’s cathedral and the seat of the Archbishop of Milan is one of Italy’s and Europe’s most interesting buildings. It is also the biggest completed Gothic cathedral in the world and very elegant, thanks to its bright and decorated exterior, with many (3,400 total) statues at the top. For a fee, you can walk on the Duomo’s roof, which is one of the most breathtaking experiences Milan can offer.

Not more than 5 minutes walk from Duomo (just through a very busy shopping area with many stands, mostly with souvenirs) is Teatro alla Scala, the world famous opera house. If you like opera, you must see one here. Or at least, visit the La Scala Museum in the building.

Castello Sforzesco (Sforza Castle) was founded in 14th century and since then went through an interesting history. Leonardo da Vinci lived here for a while, much later (in the 19th century) the castle served for military purposes, then it was rebuilt, only to be severely damaged during the World War II. Today, it hosts museums, the most famous being Pinacoteca del Castello Sforzesco with treasures like Michelangelo’s last statue or Leonardo da Vinci’s Codex Trivulzianus manuscript.

Little bit further from the Duomo, but worth seeing (and easily accessible by a tram) is the church of Santa Maria delle Grazie with Leonardo da Vinci’s famous fresco, The Last Supper (representing the scene from the Gospel of John 13:21). Admission is restricted in order to protect Leonardo’s work from humidity and you need a reservation for getting in, necessary to be booked weeks and sometimes months in advance.

If you are a football (soccer) fan, you have definitely heard about San Siro. In this part of Milan you can visit (besides huge horse race course) Stadio Guiseppe Meazza, home stadium to two of the world’s greatest teams, AC Milan and Internazionale. A live game here is a first-hand excursion into contemporary Italy’s culture, especially when the two play against one another, which always paralyses the city for the day. If you’re not lucky to attend live, at least visit the museum at the stadium.