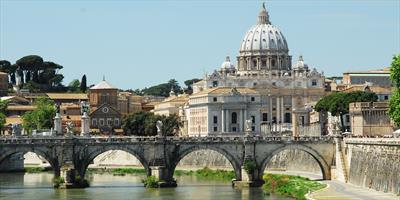 Nicknamed the “eternal city”, Rome (or Roma in Italian) was founded on 21 April 753 BC by the twins Romulus and Remus, who were raised by a mother wolf. So is the legend – not sure about the wolf, but at least the date is probably close to the truth. Several centuries later, Rome evolved into the capital of the Roman Empire and the largest (with estimated population of a million) and the most powerful city in the ancient world.

As a result, Rome is naturally an ideal place for exploring the history of what once was world’s superpower and provides an opportunity to see many glorious ancient monuments on your own eyes. The first that comes to mind is the Colosseum, the largest Roman amphitheatre ever built, with a capacity of 60,000 spectators watching gladiator games and other forms of bloody entertainment of ancient Romans. Except the Colosseum, the most of ancient Rome sights can be found in the Roman Forum (Forum Romanum), the real political and economic centre of the empire, almost as old as the city of Rome itself. You will feel like being two thousand years back in time, watching the (ruins of) temples, palaces, and statues, or just pieces of stone and columns.

Much better preserved than the monuments inside the Roman Forum is the Pantheon, originally a temple dedicated to all Roman gods (hence its name), but in the post-empire period transformed to a Christian church (services are held here occasionally till these days). Being a miracle piece of architecture of its time (with huge dome and no support columns inside), many centuries later Pantheon served as a source of know-how for the construction of the famous cathedral of Santa Maria del Fiore in Florence, whose architect Brunelleschi cut a hole in the Pantheon’s dome to study its structure (the hole is still there to be seen).

From Fall of Roman Empire to Renaissance

After the fall of the Roman Empire, the glory of Rome as a city fell as well, as its population (from a million to several tens of thousands). Maybe, the “eternal city” would have even disappeared from the world’s map and remained only as an archeological site now, were it not for the Roman Catholic Church having its seat here since the Roman Empire times. After being more of a silent pilgrimage site for several centuries, the city of Rome found its own renaissance and got back its position as a major centre of art and culture during the time of Renaissance, with big support by the Roman Catholic Church. Therefore, besides ancient monuments, there are many Renaissance (and later baroque) buildings and other pieces of art worth seeing in Rome, including Piazza del Campidoglio designed by Michelangelo, and numerous palaces, which were originally built by rich families in Rome and today often host Italian political institutions: Palazzo del Quirinale, the seat of the Italian President, or Palazzo Chigi, the seat of the Italian Prime Minister.

While being in Rome, almost all tourists take the chance to visit the Vatican City itself, the seat of the Pope and the smallest state in the world with an area of 44 hectares (or 109 acres) and a population of less than a thousand. Although the Vatican City is officially a different country, there is no border (just a white line on the ground) and you can freely come to St. Peter’s Square to see the actual residence of the Pope, the Apostolic Palace, St. Peter’s Basilica and the famous Sistine Chapel decorated by Michelangelo.

Today’s Rome has 2.7 million inhabitants, it is the capital of Italy and the seat of several organizations within the United Nations structure, the most influential being the Food and Agriculture Organization (FAO), the World Food Program (WFP), and the International Fund for Agricultural Development (IFAD). In modern European history, it is known as the birthplace of the European Union, as the Treaty of Rome was signed here in 1957, establishing the EU’s predecessor, the European Economic Community. It is still a major centre of culture and (behind London and Paris) the third most visited tourist destination in the EU. Apparently, these tourists know what they are doing.