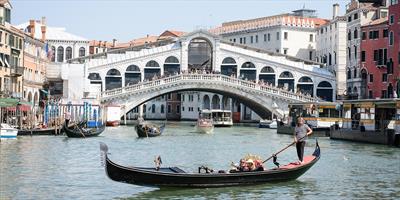 In the Middle Ages, the Venetian Republic (a city state) was a major maritime and commercial power and, thanks to its wealth, a centre of art for several centuries including the renaissance. The city was uniquely built on many small islands in the Venetian Lagoon between the mouths of the rivers Po and Piave in northern Italy. While this fact enables the unparalleled nature of Venice, it also threatens its future. In the last decades, there has been an evidence of Venice sinking.

No Cars and Many Tourists

What is commonly understood under Venice by tourists is actually only the smaller historical part of the city on the islands. Almost ¾ of today’s 272,000 inhabitants live in the mainland. In the historical centre, the life goes in its own style and is primarily driven by tourism. With canals in place of streets, you won’t find almost any cars here, a pleasant difference from other cities. Common means of transport include vaporetto (water bus) or water taxi (the gondolas are a pricey tourist attraction rather than a way of getting somewhere).

Any tourist visit to Venice would not be possible without seeing Piazza San Marco. Venice’s main square borders to sea on one side and this is where many people enter it, arriving by vaporetto or water taxi. The majority of the most popular sights in Venice is located directly at San Marco Square (including Basilica di San Marco and the Doge’s Palace), or in its immediate proximity. In the peak season, the square is very crowded (not only with people, but also with pigeons). If you stay in Venice overnight, getting up early and seeing Piazza San Marco empty is worth it.

All over the world, you won’t find many cathedrals like Basilica di San Marco (St. Mark’s Basilica). It was built in Byzantine style and its interior is decorated with beautiful mosaics, illustrating the scenes of the Old and New Testament and St. Mark’s tales. In the past, the Basilica became the symbol of greatness and wealth of Venice, nicknamed Chiesa d’Oro (church of gold).

If you would like to see Venice from the air, you can climb the 325 feet (99m) high Campanile di San Marco, the landmark of Venice that is more than a thousand years old – or better said, a hundred years old. In 1902, the original tower suddenly collapsed and exact replica was built ten years later.

Being the seat of the Doge of Venice and the centre of the city’s politics in the past, the Doge’s Palace, or Palazzo Ducale, is now a museum, with paintings by Tintoretto or Veronese in its collections. The gothic building makes an impression of reversed gravity at first glance, thanks to its arcades and combination of colours.

If you leave Piazza San Marco just where Torre dell’Orologio (the clock tower displaying also the Zodiac sign and phase of the moon) stands, you will be captured by complex narrow streets with numerous shops, leading you to the Grand Canal and the Rialto Bridge in the end (if you won’t get lost, which is pretty easy). Take time and just wander through this labyrinth of streets and bridges, because they are what creates the unique Venice atmosphere.