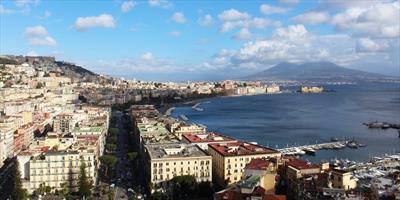 Naples (or Napoli in Italian) is located south of Rome and feels like the most Italian of all the big cities. Pizza has its origin here. The climate and way of life are truly Italian, warm and relaxed. Not that relaxed is the traffic, which many foreign visitors would also describe as very Italian (be very careful when crossing a street, you never know what may come from whichever side). Under the infamous volcano Mount Vesuvius, the third largest Italian city offers a wonderful tourist experience of this wonderful country.

See best areas and places to stay in Naples.

There are 3 big castles in Naples. Castel dell’Ovo (Egg Castle) is the oldest one. It was built on an islet in the Gulf of Naples by the Greeks two thousand years ago (the current building was actually built in the 12th century). Thanks to its location in the Gulf, it is one of the most photographed sights in Naples. Currently it hosts the Museum of Prehistory (normally not open for public).

Second castle, Castel Nuovo (New Castle), was also built by the sea, next to the port of Naples, in the end of the 13th century by Charles I, the first king of Naples. Conversely, the third castle (or better a fortress), Castel Sant’Elmo, stands on a hill above the city, providing great view of the whole Gulf of Naples.

Besides La Scala in Milan, Teatro di San Carlo in Naples is another theatre that would make it to every list of world’s top opera houses. Regarding size, it is the biggest theatre in Italy (has 6 tiers), and it is also the oldest major theatre in continuous operation in Europe (founded in 1737). Even if you don’t attend a performance here, you can take a guided tour.

Palazzo Reale is located at the main square (Piazza del Plebiscito) in close neighbourhood of Teatro di San Carlo. It was founded at the beginning of the 17th century and after serving as the seat of various Naples governors, today it is a museum showing apartments of the former Naples monarchs. There are also sculptures of the most powerful of them.

Duomo and Churches in Naples

Like other Italian cities, Naples is very religious and has hundreds of churches. The Cathedral (Duomo) was built at the end of the 12th century and is dedicated to San Gennaro (St. Januarius), whose bust you can see there. There is a vial of his blood inside the cathedral that is brought out twice a year (in May and September) and liquefies. If it failed to do so, something horrible would happen to Naples, so is the legend. Other known churches include Church of Santa Chiara, Church of Gesu Nuovo, Church of San Lorenzo Maggiore, or Church of San Gregorio Armeno.

The most interesting and valuable artifacts of Ancient Rome, taken from the cities of Pompeii and Herculaneum, destroyed (and well conserved) by the nearby volcano Mount Vesuvius, can be seen in the National Archaeological Museum (Museo Archeologico Nazionale di Napoli), together with sculptures from the renowned Caracalla Baths.

A good place to visit, especially when you need a rest from all the things which are either two thousand years old or Renaissance, is the Naples Aquarium, the oldest aquarium in Europe. Here you will see hundreds of various marine plants and fish.

It is also a good idea to make a short trip to one of the interesting places near Naples. If you are looking for beautiful coastal sceneries, take a boat to the island of Capri, the sought after upscale summer destination popular with artists and celebrities, and known already to the Roman emperors. Similarly beautiful and popular is the mainland Amalfi Coast south of Naples. If you are not afraid of a more physically intensive experience, make a trip to the dread volcano, Mount Vesuvius.