One of the best things to do in Gran Canaria, besides the beach and hiking, is exploring the serpentines and vistas of the island’s mountain roads – with a car, motorcycle, or bicycle. One of the best accessible drives if you stay in Maspalomas, Playa del Inglés, or other resorts in the south, is the Ayagaures Valley circular drive. This page is a detailed guide. 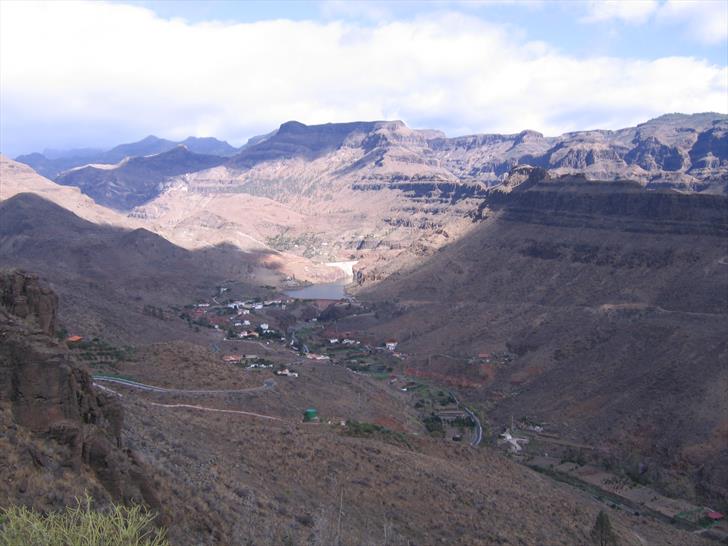 At the end of this valley there is a village named Ayagaures. There is also a dam – actually two dams, named Ayaguares and Gambuesa. These places, which you can see on the photo above, are the targets of this drive, although like most drives in Gran Canaria, it is the drive itself that is the destination.

There are two parallel roads from Maspalomas to Ayagaures. One (GC-504) down in the valley and another (GC-503) high on the mountain range that forms the western wall of the valley. You can see a piece of both roads in the next photo: 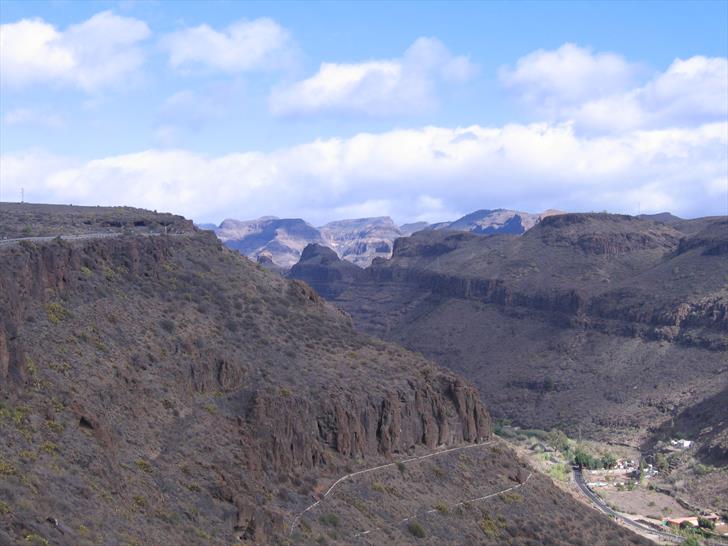 Total distance of the GC-503/GC-504 circular drive is about 25km, but don’t let that mislead you – the duration will most likely be an hour or more, as you will not only want to make stops to enjoy the views, but also driving very slowly. The speed limit is 40km/h on most sections and it’s really not physically possible to go faster anyway due to the curves.

Let’s see a few more photos of what you can expect and shouldn’t miss on this trip. We will take the GC-503 (the upper road) to Ayagaures and then the GC-504 back to Maspalomas, although you can of course drive in the other direction as well.

Road GC-503 starts at the roundabout next to Sonnenland commercial centre in the centre of Maspalomas. It goes north and passes under the motorway (GC-1). If you aren’t sure, follow signs to Aqualand Maspalomas and Palmitos Park. 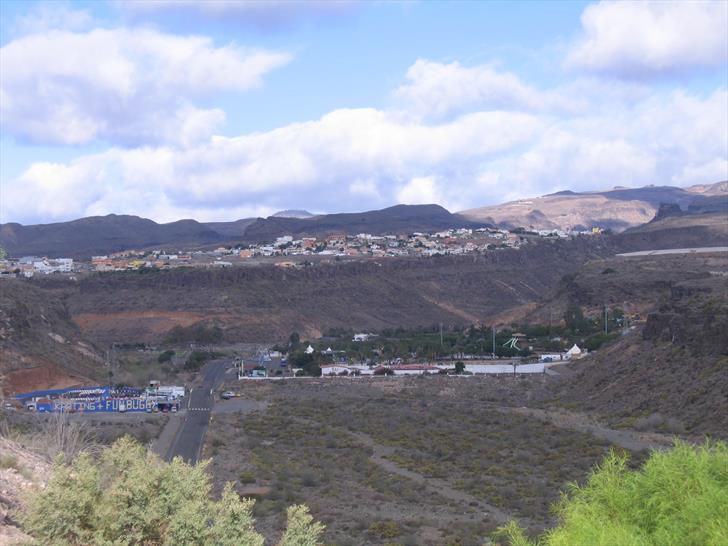 A few metres after passing Aqualand (the green area on the right in the photo above), road GC-503 turns left towards a village named Montaña la Data (the houses on top of the rocks). Road GC-504 starts here, heading to the right. You will arrive here at the end of the trip.

The GC-503 soon starts to climb. You will drive through Montaña la Data and shortly after leaving the village there will be a small space to park on the left side of the road. It is a good place to stop and look back – there is a good view of Maspalomas, Playa del Inglés, and the sea: 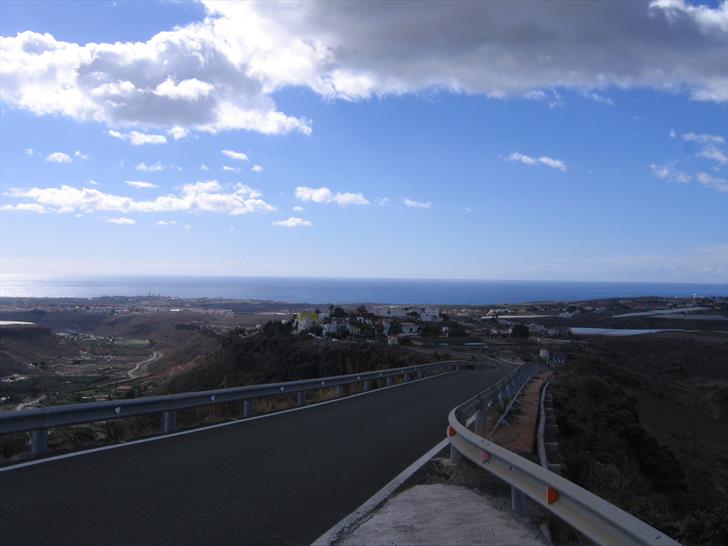 Here is the same place, looking ahead: 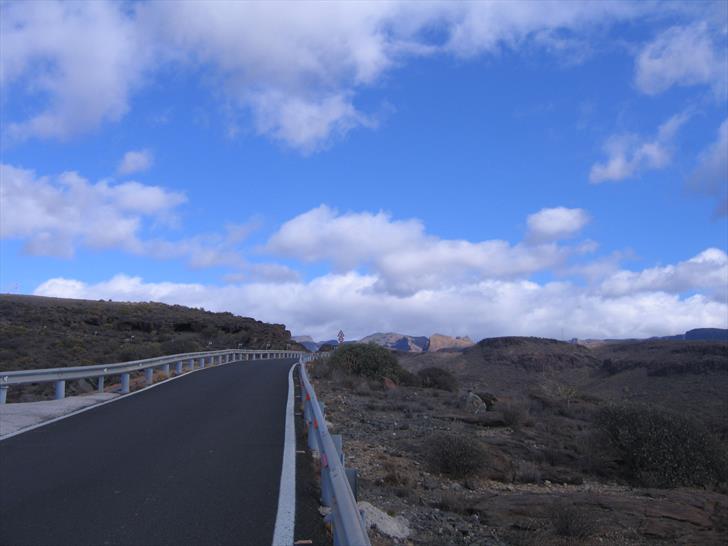 Drive slowly and carefully, especially approaching curves. This circular trip is also very popular with cyclists and some of them ride as fast as, or even faster than, the cars. 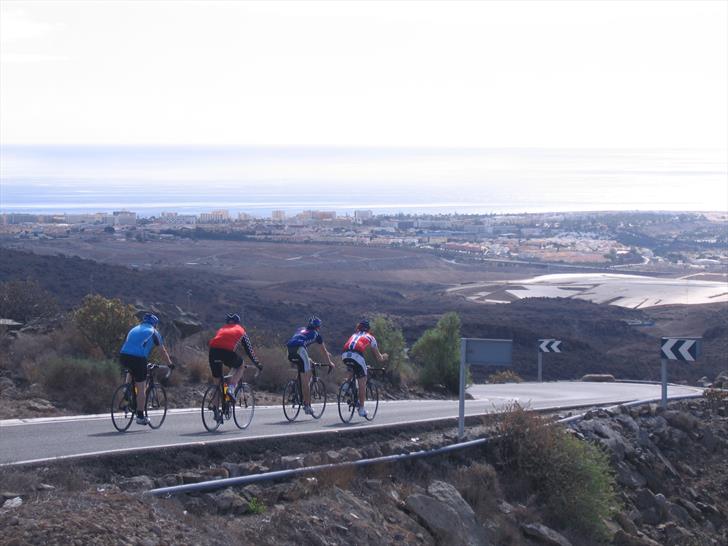 Over the next few kilometres you will be driving through an area with houses randomly scattered around the road – officially the settlements of Roca Negra and Monte León. Most roads in Gran Canaria have kilometre signs, which you can also see on this road. This is km 7; Ayagaures is km 14. 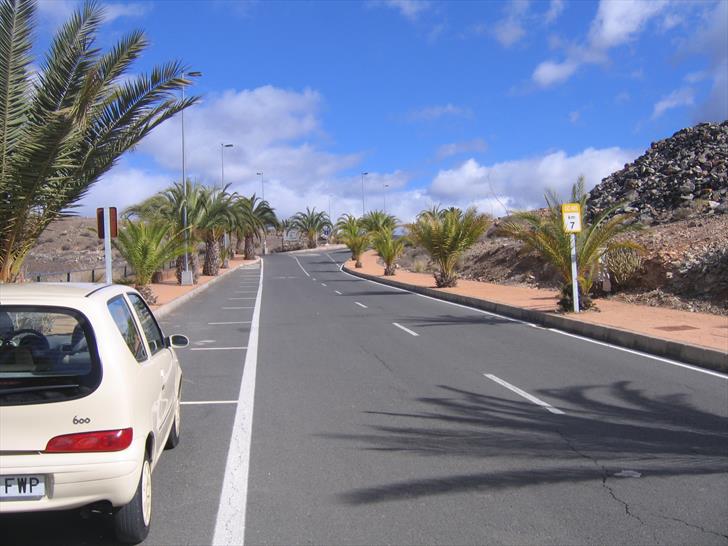 In many places you can still see Maspalomas and the ocean. 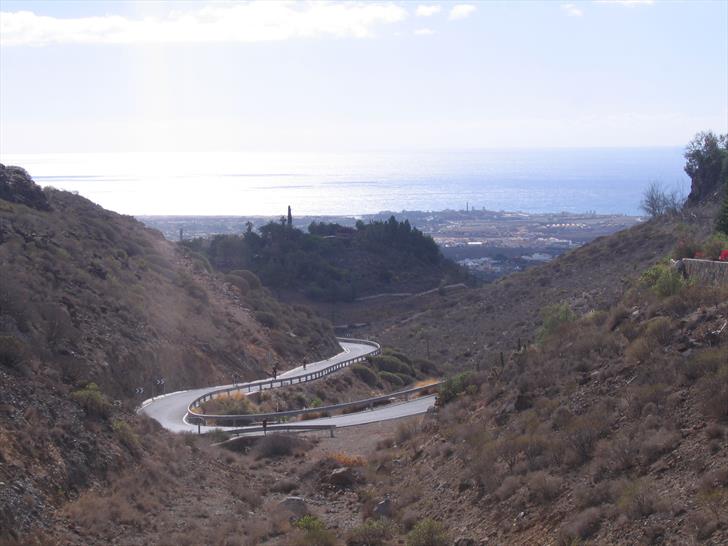 There are sharp curves all the time and the speed limit is 40 km/h on most of GC-503 (and in fact, on most Gran Canaria roads). 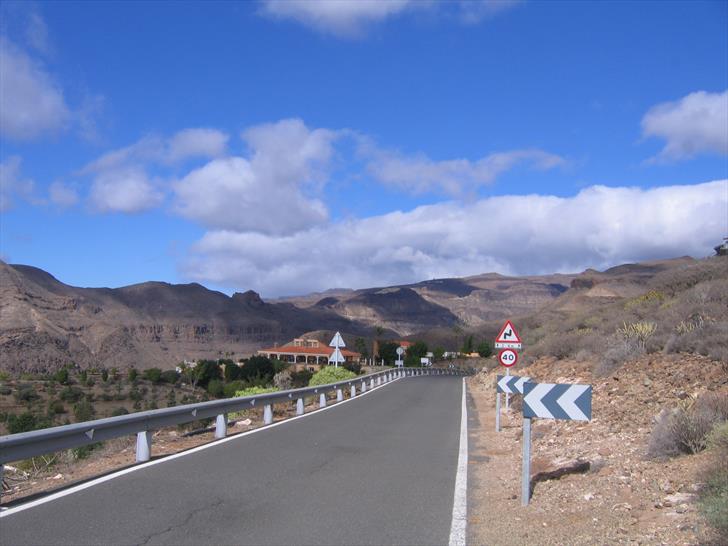 There are numerous parking places, where you can safely stop and enjoy the views. 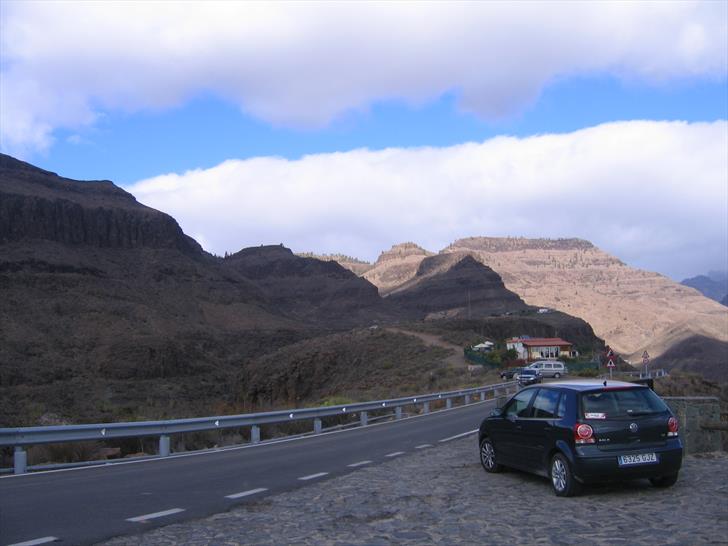 After some 12km of driving, the road starts to descend into the Ayagaures Valley. 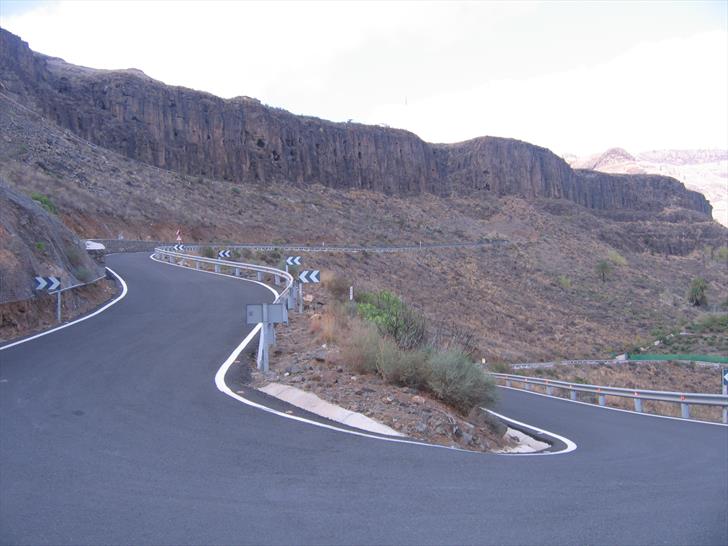 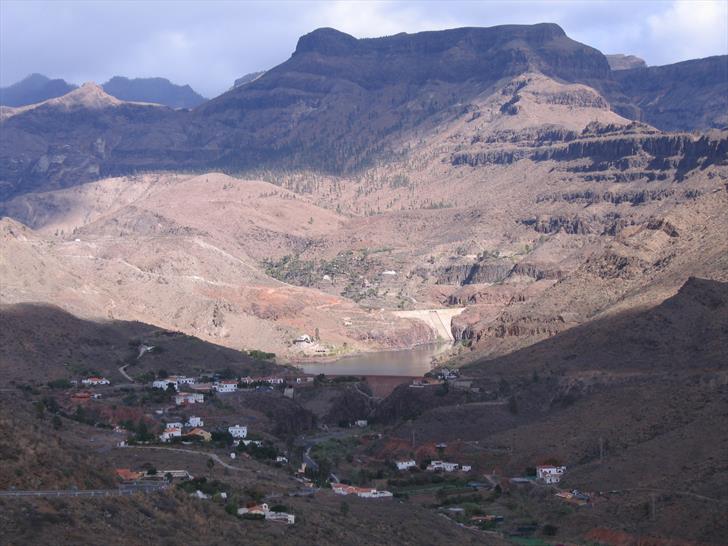 The serpentines don’t stop once you enter the village. Quite the opposite actually. 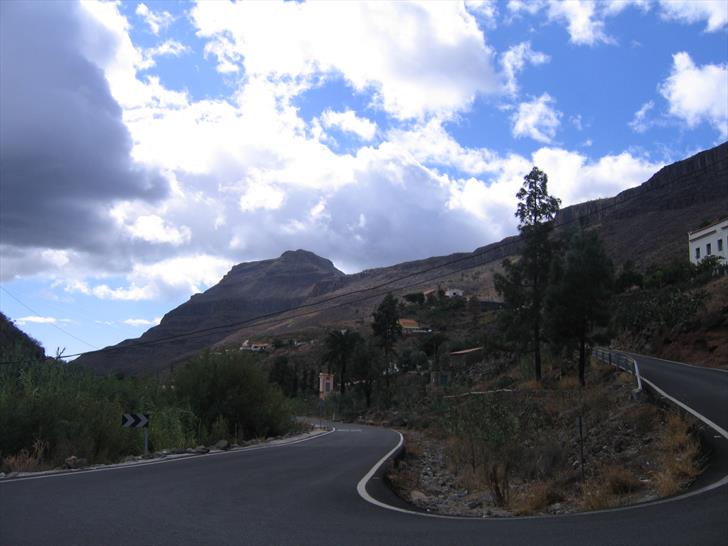 The village has two parts: Ayagaures and Ayagaures de Abajo (Lower Ayagaures), although it is not completely clear where one ends and the other begins. 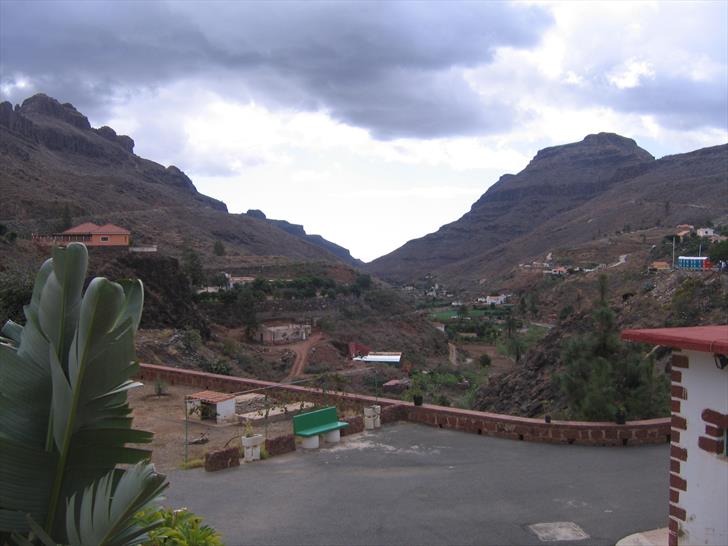 At the furthest point of the trip, the road takes a sharp turn around the Ayagaures church. In this place GC-503 becomes GC-504. You can stop here and take a walk to the dam, which is just 200 metres from the church. 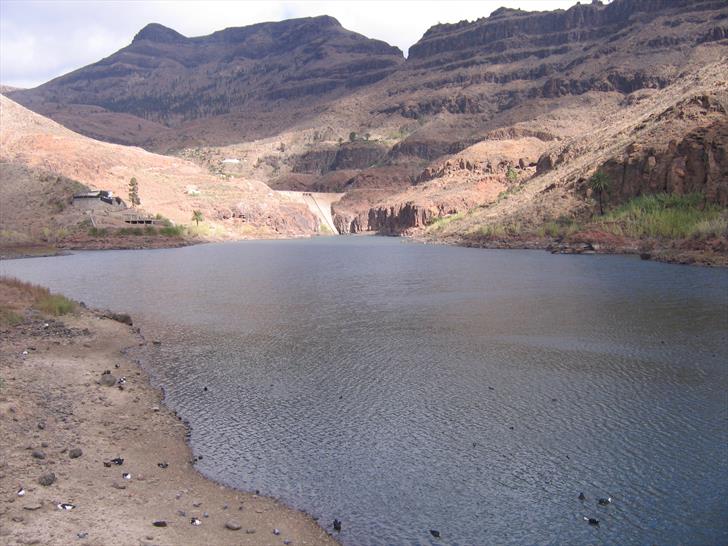 You can walk on the dam itself: 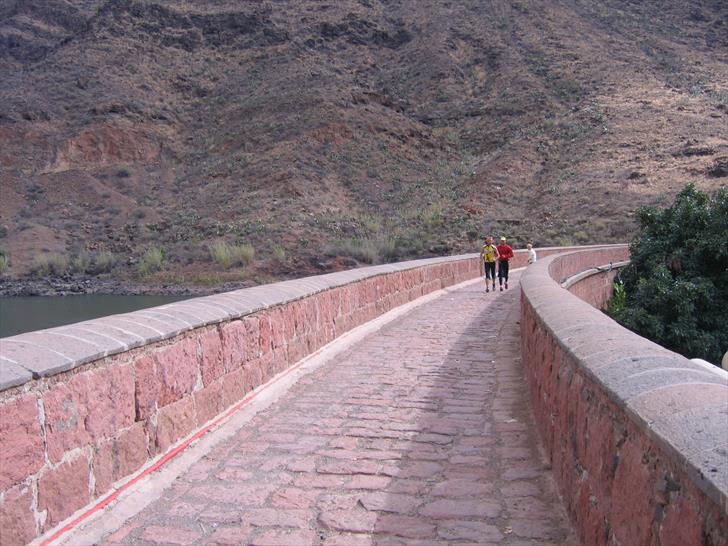 From the dam you can see not only the village, but in the background also the road GC-503 that brought you here. 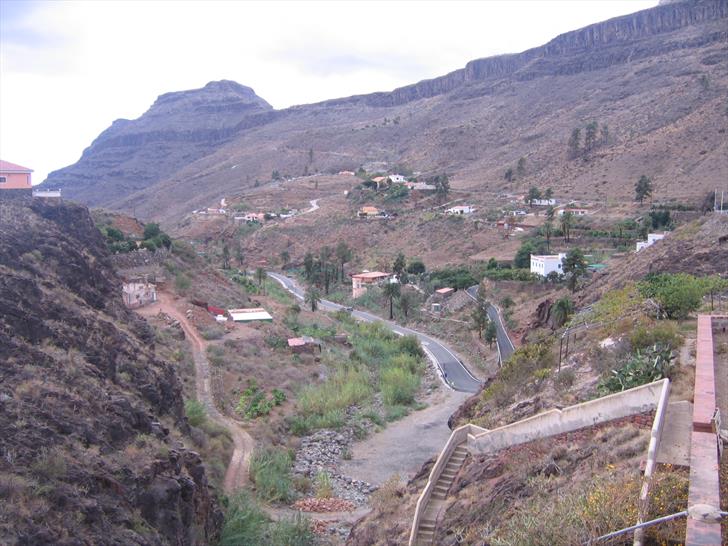 The dam is apparently also good for fishing: 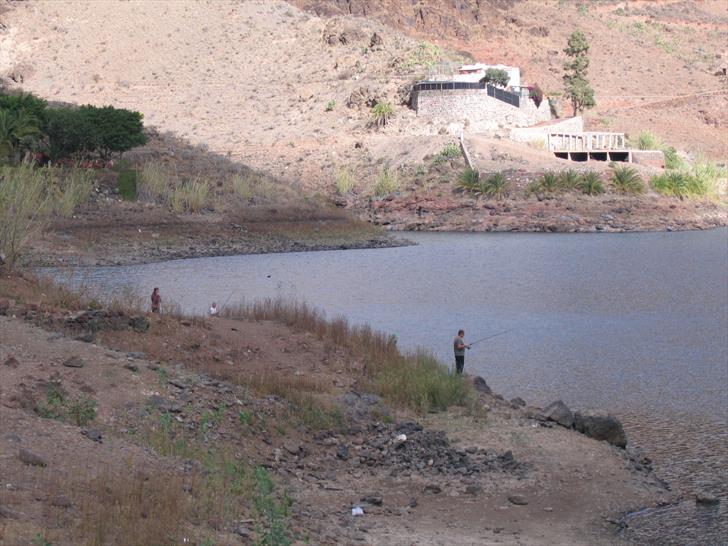 As mentioned earlier, there are in fact two dams here. The one in the village is the smaller lower dam, named Presa de Ayagaures (or Embalse de Ayagaures; presa means dam, while embalse means reservoir). The upper one is Presa de Gambuesa. You can see the upper dam from the lower dam. 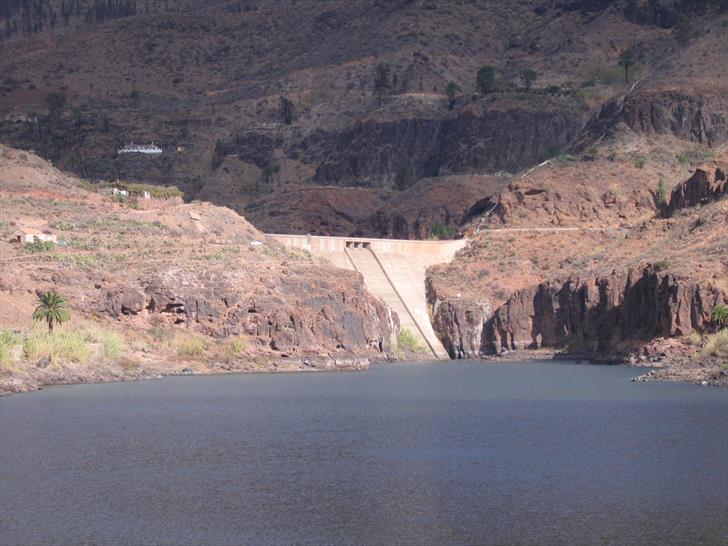 You can walk to it too; it is about 1.2km from the lower dam. Theoretically it would be possible to drive half of the way, as there is no sign prohibiting entry, but the road is extremely narrow (not enough for two cars to pass) and gets progressively narrower.

GC-504 Back to Maspalomas

The ride through the valley on the GC-504 is a bit shorter and much faster than the ride on the GC-503. There are fewer curves and virtually no more climbs.

You will often see houses on high cliffs and wonder how people could build them. 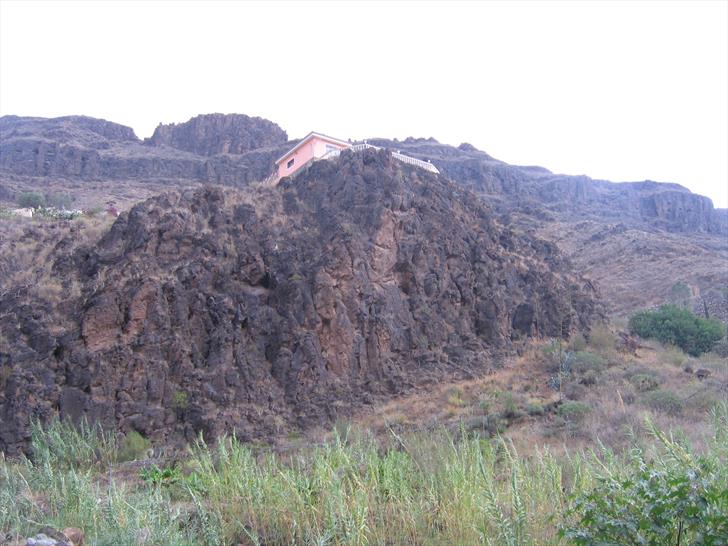 Ayagaures is a very small, remote place, some 12-15 km away from the busy resorts. Accommodation options directly in Ayagaures are very limited. Two options are Villa Ayagaures just next to the dam and Casa Romantica a bit higher up with views of the dam.

Of course, there are plenty of hotels and apartments, as well as all the other tourist infrastructure, in Maspalomas or Playa del Inglés on the coast.