The west coast of Gran Canaria (the one facing Tenerife) is rocky and wild. You won’t find towns here because there simply isn’t space for them. Most of the west coast is high cliffs. Carved in these cliffs, several hundred metres above the ocean, is road GC-200 – one of the most exciting drives in the Canary Islands and worldwide.

Although its best section (between the viewpoints Mirador del Balcon and Andén Verde) has been closed since 2016 following major rock falls and opening of a parallel road (GC-2) further inlands, the other sections of GC-200 are still accessible and worth visiting. This page provides some guidance, and I also include a few photos from the section that is now closed. 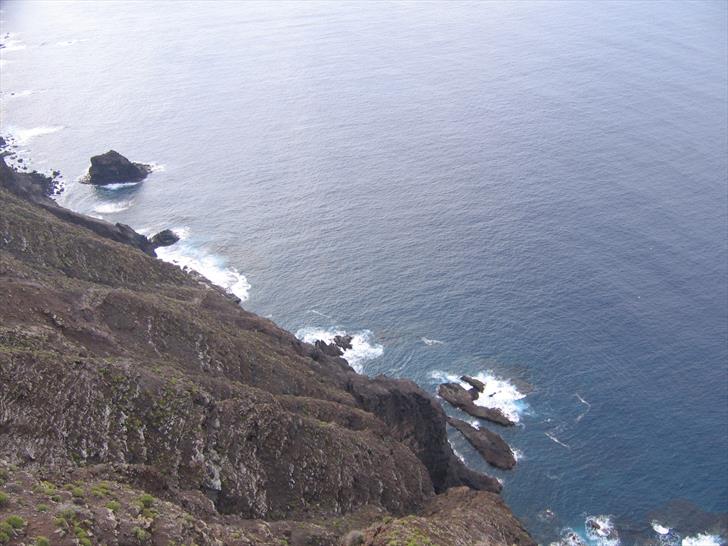 The west coast road, GC-200, starts in Puerto Mogán at the end of highway GC-1. It heads inlands to Mogán and La Aldea de San Nicolas, quite far from the coast, but still a very interesting drive with lots of great views. From La Aldea it returns down to the coast to Los Caserones, which is roughly in the middle of the west coast. Up to this point the road is still as before and open.

From Las Caserones it climbs onto the cliffs, heading north-east along Gran Canaria’s rough west coast. This section has now been replaced with the new road GC-2.

One of the best known points on GC-200 has always been Mirador del Balcon, a viewpoint where you can see virtually the entire coast from Los Bajones to Punta de Sardina (the north-western end of the island behind Agaete), as well as Tenerife and Mount Teide. 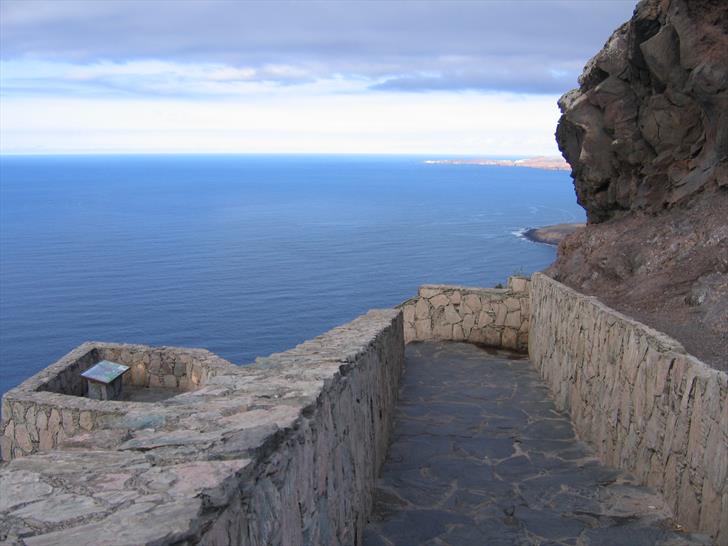 It is still possible to drive to Mirador del Balcon from the new GC-2 via an open 3km section of the old GC-200. The closure is shortly after the Mirador, so you can visit the Mirador and return to the GC-2 (the total detour to the Mirador and back is about 6km). It is prohibited to enter the closed section of GC-200 even on foot, as it is obviously dangerous.

The new GC-2 takes you further north-east along the coast (though further away from it than the original GC-200 road and with very limited views). The GC-2 now ends in El Risco, where you will return to the old GC-200 and continue to Agaete.

Photos from the Closed Section

The following are a few pictures I took when driving the west coast road as it was still open. The bright piece of land in the background is Punta Sardina.

It’s easy to see why rock falls were always a problem on this road.

Another popular (though unofficial) place for looking around and taking pictures was at km 18. 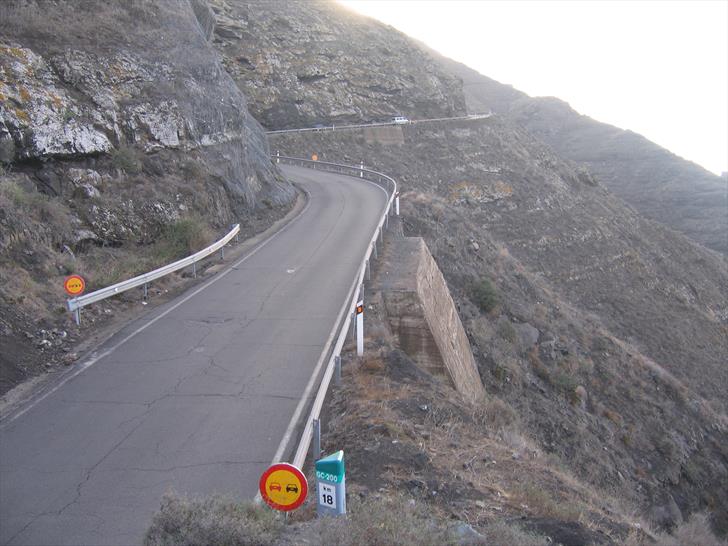 There was a small (5-8 metres high) rock between the road and the cliff’s edge. It wasn’t hard to climb on it and the view was perfect – the ocean was 500 metres below.

The next picture shows the coast from km 18 towards Agaete. You can see a section of road GC 200 on the right.

Amazingly, trucks were also taking this road regularly. When you looked at them and at the road, you wondered how they could fit in here.

GC-200 from El Risco to Agaete

The next pictures are from the section after El Risco, which you can still drive today.

El Risco is one of the few settlements on the west coast and a typical white Canarian village: 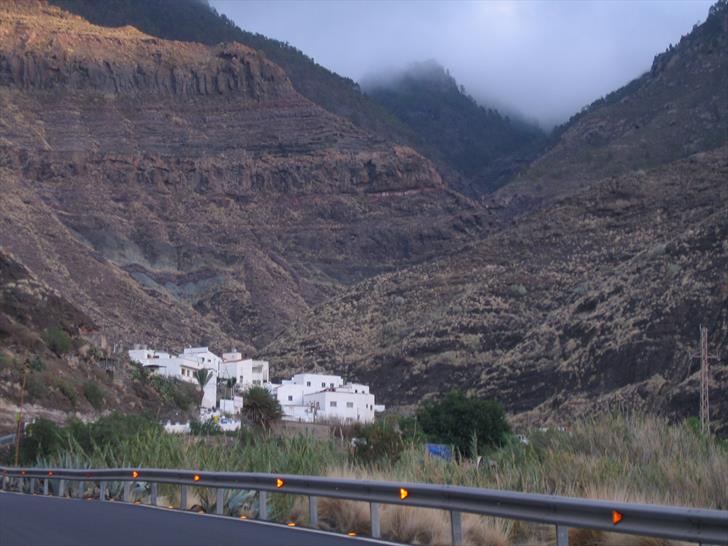 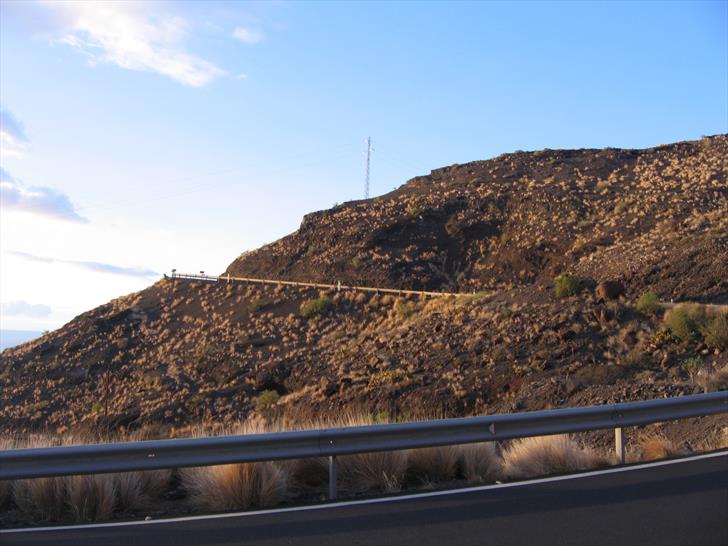 After Barranco de La Palma, you are already getting close to the end of GC-200 in Agaete.

From many places on GC-200 you can see Tenerife and Mount Teide above the Atlantic Ocean. 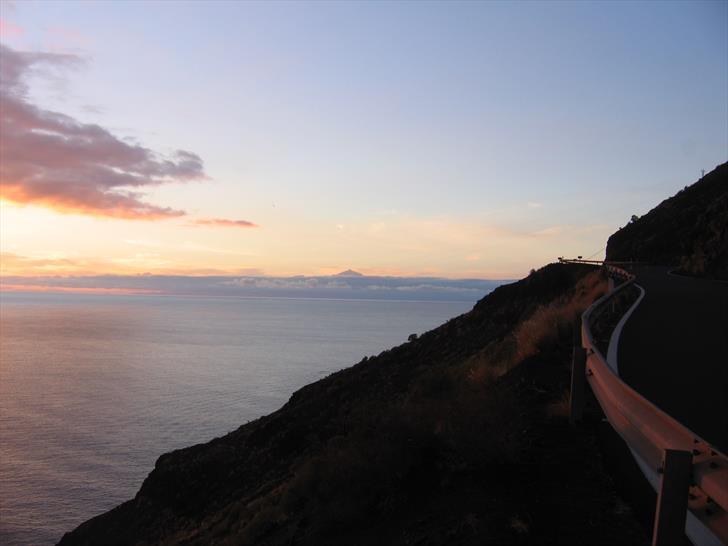 The west coast road is one of the best places where to watch sunset in Gran Canaria. 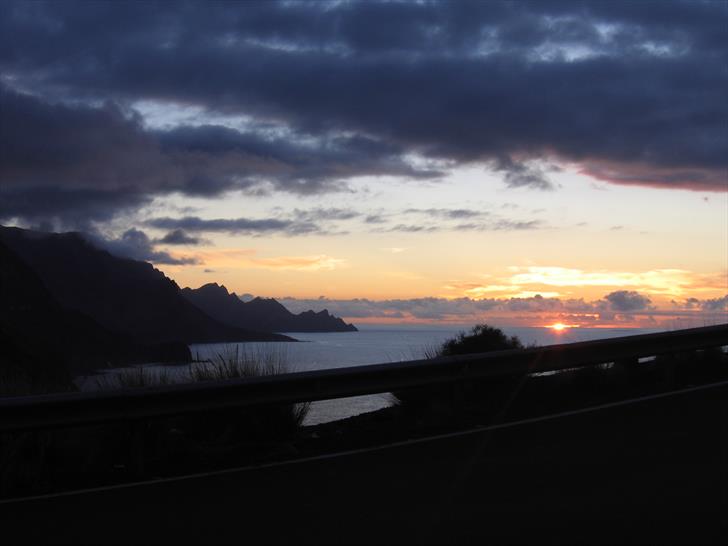 Road GC-200, as well as the rocky west coast, ends in Agaete. If you need to return to the resorts in the south, such as Maspalomas or Playa del Inglés, it is faster to drive to Las Palmas and then along the east coast, as most of that is on highways.