Morro Jable is the biggest tourist town in the south of Jandia. Unlike some of the other resorts in south Fuerteventura, Morro Jable is quite lively and not limited to tourism – it has a sizeable population of locals, a marina and port with regular ferries to Gran Canaria and Tenerife. Morro Jable has numerous restaurants of different styles and generally great quality. It is also a good starting point for exploring the mountains, or the westernmost tip of the entire island and Punta Jandia Lighthouse.

Places of Interest in Morro Jable

Avenida del Saladar is the main street stretching along the beach in Morro Jable. Many of the best hotels, apartment complexes, restaurants and shops are situated on Avenida del Saladar or just above it. The main tourist area is named Solana Matorral.

The street ends with a roundabout in front of Morro Jable Fire Station. From there the main road (FV-2) continues as Calle Quevedo to Morro Jable port and ferry terminal.

The big beach in Morro Jable is named Playa del Matorral (and the southernmost tip of Fuerteventura which is also here is named Punta del Matorral). The beach stretches for 4km along the entire coast in Morro Jable. Besides generous length, it is also generously wide in most places, and has fine white sand. The descent to the water is very gradual and shallow, which makes the beach quite safe and family-friendly. That said, there can be waves and currents at times. There are lifeguards and suveillance stations at various places along the beach, as well as basic services like showers and toilets.

Along most of its length Playa del Matorral is separated from the inlands (and from Avenida del Saladar) by the so called saladar, which is a precious area with unique vegetation which only grows in places which are part time submerged in seawater and part time dry. It is a protected area and it is not allowed to walk outside the designated walking paths which connect the beach with the street.

The lighthouse at Punta del Matorral (approximately in the middle of the beach) is the most visible landmark of Morro Jable – if you have been there, you couldn’t have missed it. With 59 metres, Morro Jable Lighthouse is the tallest lighthouse in the Canary Islands, leaving behind some of the other well known lighthouses like the one in Maspalomas or Las Palmas (both in Gran Canaria). It dominates the beach (Playa del Matorral) and marks the southernmost point of the entire Fuerteventura.

There is a skeleton of a sperm whale situated on the grass near the beach in Morro Jable, not far from Morro Jable Lighthouse (it’s near the middle one of the three roundabouts). 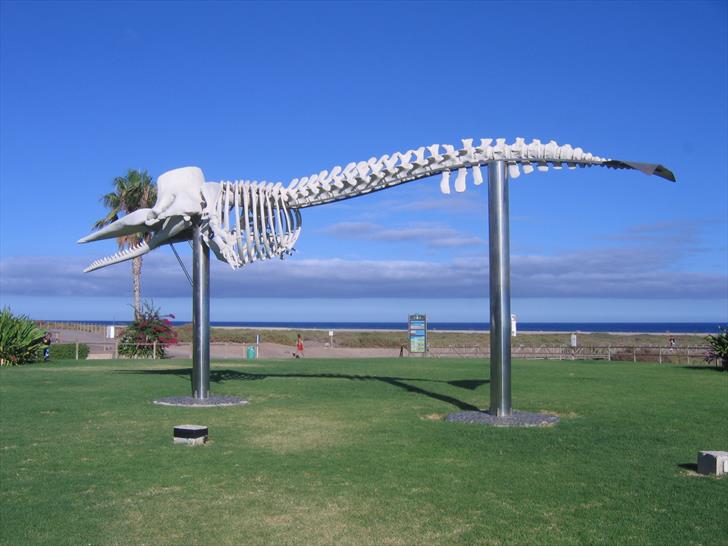 Jandia Golf Course, which may also be referred to as Morro Jable Golf Course, is situated in Barranco de Vinamar, a valley reaching from the Matorral Beach into the mountains above Solana Matorral, the main tourist part of Morro Jable. Enclosed by mountains on almost all sides, it is a relatively difficult course, with numerous challenging spots, two lakes, palm trees and above all beautiful views. There is a golf hotel next to the golf course – Hotel Jandia Golf.

You can get into Barranco de Vinamar from the main beach-front street (Avenida del Saladar), exiting it at the roundabout near the sperm whale skeleton – the street’s name is Calle Princesa Ibaya, which then becomes Calle Biocho.

Places of Interest near Morro Jable

The highest mountain of Fuerteventura is Pico de la Zarza, also known as Pico de Jandia. the peak is 807 metres above sea level and it’s right above Morro Jable. There is a path which you can walk from Morro Jable to the summit. Although the altitude may not look that impressive, remember you will be walking from the sea, so it’s 800 metres of ascent. It is best to start very early in the morning to avoid the strong midday sun and afternoon heat. Basically all or the route is exposed to sun and wind as there are no trees and bigger vegetation (but that’s not that surprising in Fuerteventura). The starting point of the Zarza walk is by the underpass under the main street near the easternmost roundabout by the beach. There are signs and information panels.