The Viking Ship Museum in Oslo was established with the main purpose to preserve three big Viking ships discovered in various places in Norway. Today the museum is one of the biggest tourist attractions in Oslo and it’s definitely worth a visit.

This is how the Viking Ship Museum looks from the outside:

Planning a Visit to the Viking Ship Museum

The museum is located in Bygdoy, a peninsula which lies to the west of Oslo city centre. Very close to the Viking Ship Museum there are several other well-known museums dedicated to Norwegian ships and expeditions, including the Norwegian Maritime Museum, Kon-Tiki Museum (Thor Heyerdahl’s expeditions), and Fram Museum (housing the polar expedition ship Fram).

Therefore, if you are interested in ships and seafaring in various forms, you can plan a ship-themed day and visit the Bygdoy museums together. The time needed for each will of course vary depending on how deep your interest is in the particular subject, but for most visitors I would say 1-2 hours for each of the museums is just enough, as they are all relatively small.

How to Get to the Viking Ship Museum

The best way to get to Bygdoy (at least the option preferred by tourists) is by boat, which departs from Oslo Harbour – in front of the City Hall. Especially when the weather is good, you will get a wonderful view of Oslo’s seafront, the Akershus Fortress and the surrounding coast.

The entrance to the Viking Ship Museum looks like this: 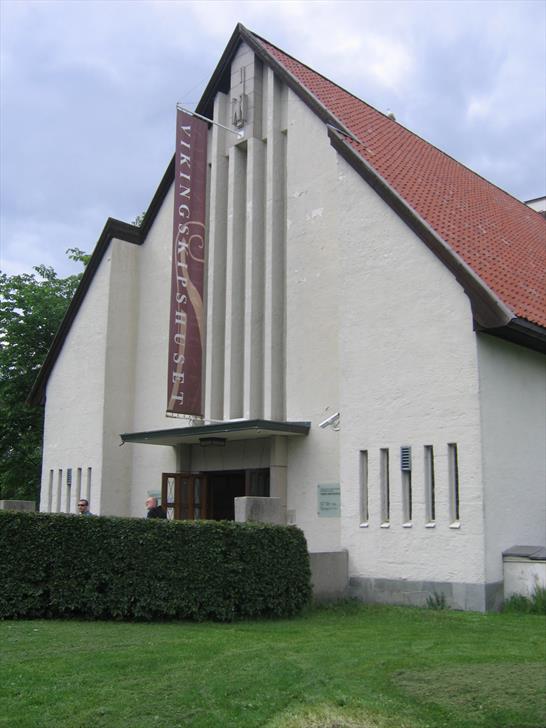 What to See at the Viking Ship Museum

Not surprisingly, Viking ships! Not just some Viking ships – the ones shown here are some of the very few large and relatively well-preserved Viking ships in the world.

There are three big ships in the museum – each has its own dedicated hall which it occupies almost entirely. The three ships are:

You can see some of my photos and read more about details of individual ships (such as size, how they were discovered etc.) below.

The Oseberg ship (Norwegian name Osebergskipet) is the most valuable and best preserved of the three big ships in the museum. In fact, it is considered one of the best preserved relics of the Viking Age in the world. In the photo below you can see the ship with the museum’s entrance in the background.

The ship was discovered in a burial mound at Oseberg farm (Oseberghaugen) near Tonsberg , about 100 km to the south-southwest from Oslo. Besides the ship the burial site contained many smaller original Viking tools and relics, which you can also see at the museum.

The Oseberg ship is 22 metres long and 5.10 metres wide. It had 15 pairs of oars. Although it looks quite big, according to experts it was probably not robust enough to be able to sail very far from the coast. Like other Viking ships, the Oseberg ship is made of (mostly oak) wood.

The estimated time of building the ship is about 800 AD. 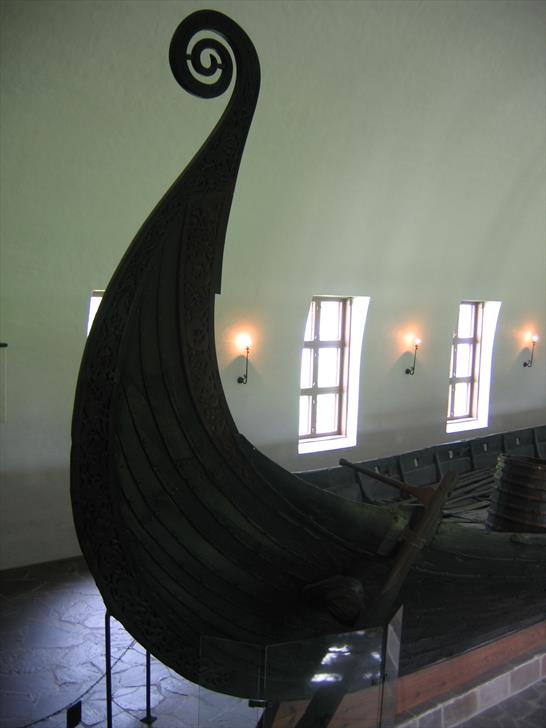 The Gokstad ship (Gokstadskipet) is the largest of the three. It is 23.2 metres long and 5.2 metres wide. It had 16 pairs of oars and a sail of 110 sqm, probably enough to generate speed of about 12 knots (22 km/h). The ship had been designed to regularly carry about 40 people, although its maximum capacity under special circumstances could have been as much as 70. 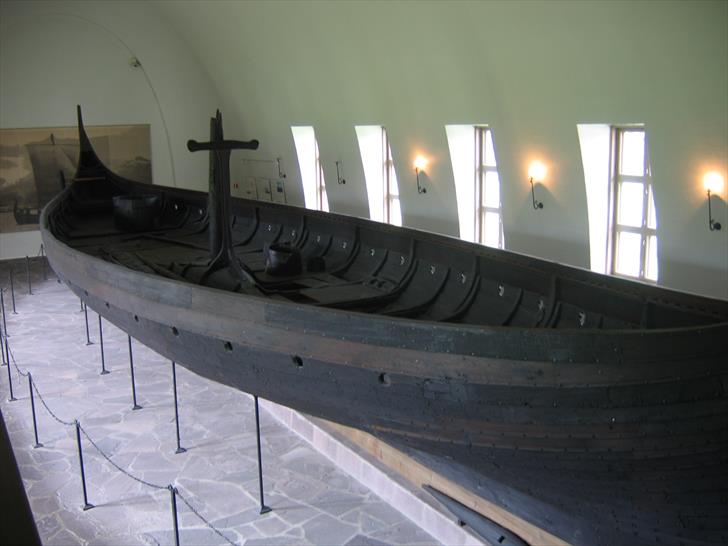 Like the Oseberg ship, the Gokstad ship is also named after the place where it was discovered, which is actually quite common with Viking ships (of course the Vikings did not call them that – but there is no way for us to know the original names). It was discovered in a mound at Gokstad Farm (Gokstadhaugen) in Sandar, part of Sandefjord in Vestfold region in south Norway. It was excavated by Norwegian archaeologist Nicolay Nicolaysen in 1880.

If Sandefjord sounds familiar to you, it is most likely due to the Sandefjord – Torp airport (TRF), which mainly low-cost airlines use to serve Oslo. It is about 120 km to the south-southwest – just 20 km further in the same direction from Oslo as the Oseberg ship site. 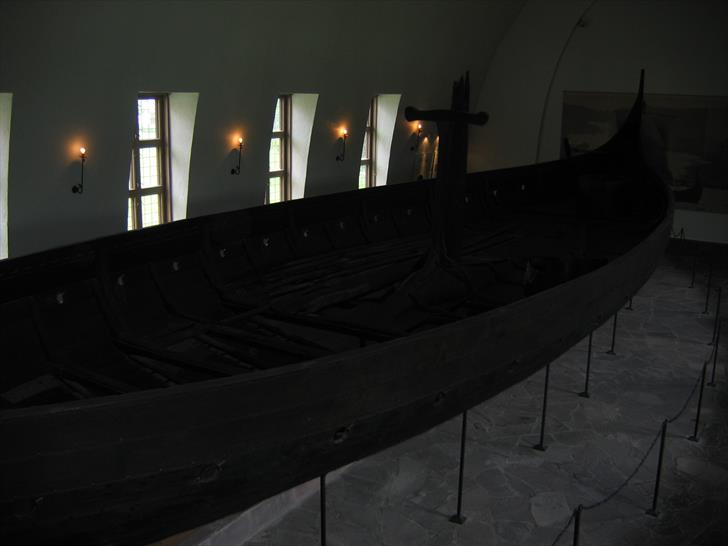 In the photo above you can see how the ships are displayed in the museum. You can walk all the way along the entire perimeter of each ship and get really close to it. You can’t get onto any of the ships though, as they are too precious and too fragile for that.

That said, of the three ships in the museum, the Gokstad ship is believed to be the one most likely robust enough to sail further away from the coast. Several replicas of the Gokstad ship were built, including The Viking, a ship that crossed the Atlantic Ocean from Bergen in Norway to New York in 1893 (it was then featured at the World’s Columbian Exposition in Chicago later that year).

The Tune ship (Norwegian name Tuneskipet) is the least well preserved of the three big ships at the museum. Only fragments remain, but you can see that it was quite big when the Vikings were using it – it was around 22 metres long (14 metres keel), 4.5 metres wide, and it probably had 11 or 12 pairs of oars. It is estimated that the Tune ship was built around year 900 AD.

The name of the ship is again derived from the place where it was discovered – the village of Tune in Østfold in south-eastern Norway (about 90 km from Oslo near the Swedish border, on the way to Gothenburg). It was excavated in 1867 by Oluf Rygh, Norwegian historian and one of the founders of modern archaeology in Norway.

Other Things to See in the Museum

Besides the three halls with the three large ships, there is a fourth hall with various smaller items of the Viking age (like a real Viking axe) and other interesting information. Among other things, you will learn how to build a Viking ship: 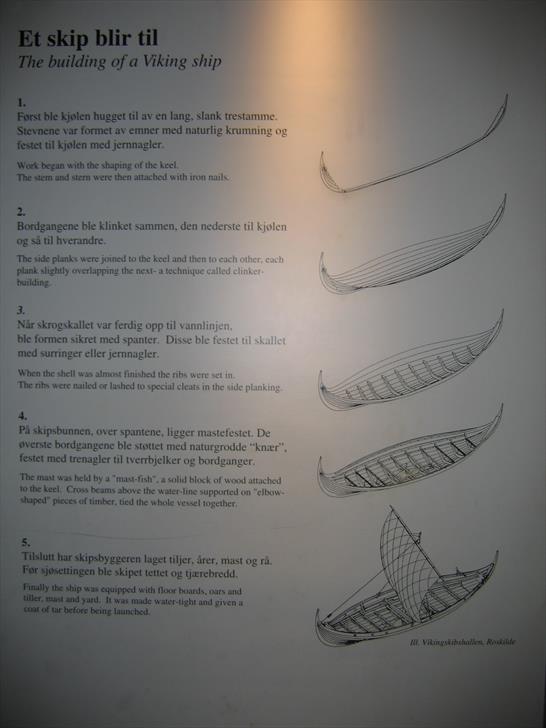 When I was visiting the museum, there were some people in the fourth hall doing some woodworking (maybe repairs work, but more likely creating a replica of some of the smaller items). The Viking Ship Museum is not just some old ships being displayed. It has quite an atmosphere and truly takes you back to the Viking times. I was lucky though that there were very few people at that time – apparently it can sometimes get very crowded.

It is best to go as early in the day as possible, but that would also be true for all the other museums at Bygdoy. The Viking Ship Museum’s opening hours are from 9 to 18 in summer and from 10 to 16 in winter. Current admission price is NOK 80. Children go free. There are also discounts for students, seniors, groups and families.

The Viking Ship Museum is managed by the Museum of Cultural History – official website here.